The Origin
of Owu Kingdom

Oduduwa (Oodua) was the first ruler of a unified Ife Kingdom and the acclaimed progenitor and patriarch of various independent royal dynasties in Yoruba land, and is today venerated as “the hero, the warrior, the leader and father of the Yoruba people”.

Obatala was the chief Priest of Oduduwa. He was a chaste man who also travelled far and near in what became known as West Africa. He was a great man who later married Oduduwa’s first daughter – Iyunade, by whom he got his first son, Ajibosin.

Identifying Sons and Daughters of Owu

What are the characteristics of the Owu – the way they see themselves and the lens through which other sub-groups of the Yoruba peer at them?

Call an Owu a dandy if you like but you can hardly fail to admit that he is well-dressed; the belief of good appearance is in-born in him or her. In manners and comportment, an Owu strives to stand out.

There is an epithet which sustains the assertion that an Owu is fashionable. Madam Efunroye Tinubu was notable as a merchant and king-maker in the Lagos and Abeokuta of the 19th century. One of her pet names – and she had many – was ‘Afigba-daro-nitori-ewe-Owu’ (one who infuses indigo in a way to prepare the unique dyes to suit the tastes of fashionable Owu youths). Tinubu, also the Iyalode (First Lady) 0f the Egba, had her extensive trading activities located in Owu quarters of Abeokuta. One of her line of products was indigo dyeing which was use for creating Adire cloth patterns and for dyeing new and faded outfits. Because of the proximity of her workshops to Owu Quarters, she took special interest in catering to the tastes of the fashionable Owu youths and made her profits. But the emphasis here is the confirmation, through that nickname of hers, of the exquisite tastes of Owu youths known for dressing resplendently.

Ancillary to tastefulness in dressing of the Owu is their graceful gait. There is the saying :O dara bii ewe Owu

Translation: He or she has the beautiful features of a young Owu

But the gait is clumsy, reminiscent of a person from Iseyin.

That’s it – another testimony of the beauty associated with an Owu. The above statement does not necessarily cast aspersion on others but simply emphasizes the well-known natural beauty with which an Owu is endowed. Look at him or her closely and you are going to see that inscrutable beauty in his build and personality. It is inborn.

An Owu is incurably steadfast – probably to a fault. An Owu makes up his or her mind and stands by it, no matter what. An Owu observes probity to the very limit. He brooks no double-dealing from another person and by the time he or she reverts to saying, ‘N o gba wun-un’ (that is unacceptable to me), a cliché for which an Owu is associated, and sometimes denigrated, he or she has the reason he can adduce for affirming it. That is a reminder of the steadfastness in an Owu. An Owu is principled.

An Owu observes honesty as a tenet of life – as much as humanly possible. The late Chief Ohuu B. Akin-Olugbade had a testimony he was fond of sharing in his life-time. It is to the effect that when he was newly enrolled at the Nigerian bar, he performed minor services like visiting the prison yards to bail out his clients. in the course of doing this, he used to testify, he rarely found citizens of Owu within those prison walls awaiting criminal prosecution. It wasn’t as if Owu are angels but it is the rarity of their criminal proclivities that he was glad to discover and attest to. The rider to this is that an honest person who is sensitive to insults would invariably strive as much as is possible to avoid criminal activities.

BROOKER OF NO NONSENSE

An Owu might be accused of strong-mindedness but he is not hard-hearted by any measure. The accusation of stubbornness was derived erroneously from the saying –

Translation: A child is born in Owu and there is curiosity to know its gender.

Is gender of relevance when none of them can be subdued!

Yes, an Owu can rarely be defeated or rendered servile or cowed down. It is a testimony of the faith and uprightness indigenous to him. He cannot deny this bravery in him but nevertheless he detests abrasive behavior. His tolerance magnet easily repels insult because he is not the one to initiate the insult. Above all, the no-nonsense disposition of an Owu is invariably tempered by a high degree of charitableness and compassion.

Admittedly, the Owu earned this label through their performances on the battle field. As other Yoruba groups can and do attest to, the Owu were unconquerable on the war front. An Owu is brave and not easy to appease once provoked to anger. But hardly is he the initiator of the provokement. What is the justification then for making an Owu the recipient of an odious label called ‘stubborness?’ until the advent of firearms, the Owu was the master of his agedengbe (broad sword) and the victor on the battle ground. The rhetoric therefore boils down to: face him and be rewarded with the just dessert.

It begins with what is termed Eburedun, a watch-night to declare the festival open. The next day after it is observed as Ojo Airin (Curfew Day), designed to keep all and sundry at home while dinning and wining. It is perhaps the most restful day of the festival week. On another day, the new yam of the year is sliced open in the presence of a public gathering to signal to every Owu, particularly the Obatala worshippers, that they are free to taste the new yam of that year. And of course, the Olowu who is the Chief celebrant, waits for this day before tasting the new year’s yam. And to round the festival off, one more day is set aside for the Akogun, the Owu war leader, to host the Olowu and his Chiefs to a full briefing of the year’s festivities. In addition, the traditional masquerade of Owu people, known as Otomporo, stages an outing as a way of declaring the festival closed.

It is the arrangement of this unique festival and the devotion of the Olowu and his subjects to it that points the Owu up as a unified people. Even the modern-day modification has not changed the coloration of this festival which is bound to continue until God’s kingdom come.

Perhaps the most unique feature which distinguishes the Owu today is the dialect because, whether we like it or not, other distinguishing features like the Owu abaja and keke facial marks have become endangered species.

The Owu dialect is strong and vibrant and can now be heard mainly in Abeokuta and Owu villages in Ogun State. This irony was created by the dispersal that resulted from the Owu War of 1821 – 1825 in the course of which the major block of the Owu settled in Abeokuta around 1834. This block now constitutes the speakers of the original Owu dialect.

The dialect faintly sounds nearest to the Oyo dialect but is distinctly different from the Oyo dialect, and it is definitely a pleasure to listen to.

Listen to an Owu as he or she says, ‘N o gba wun-un’ (I don’t take that nonsense) and you would enjoy how it sounds. For that, an Oyo speaker would say, ‘N o gba un-ni’ and an igbomina would say, ‘Mee gba yun-ni’.

The Owu say, ‘Bawun-un ni’ (yes, it is so) but the Oyo would say, Bawun ni’. Or an Owu might say, ‘ O wa ti soo se e to fi danu! (How on earth did you handle it that it spilled down!), while the Oyo say, ‘Bawo lo ti sowo se e to fi danu. The Owu sa, Ewun-un naa lo wa n binu si! (is that all that you are getting mad over) or, ‘koo sope baba mi ko lo bi mi’, (Call me bastard if…….), and so on. Bottom line: Owu dialect stands on its own and is distinct from any other Yoruba dialect. However, it should be made clear that the Owu are now domiciled in various Yoruba locations they had found themselves and therefore assimilated that dialect of their host communities. For instance, each time the Owu gather these days either for their Owu Day or National Conventon, a riot of Yoruba dialects becomes discernible. This is because those of them in ijebuland have acquired ijebu dialect. Those in kwara state speak nothing other than igbomina dialect. The Owu in Oyo and Osun states have adopted Oyo or Ijesa dialects, and so on and so forth. And all these diversities of dialect inspite of the existence of the intact Owu dialect spoken in Abeokuta and evirons. 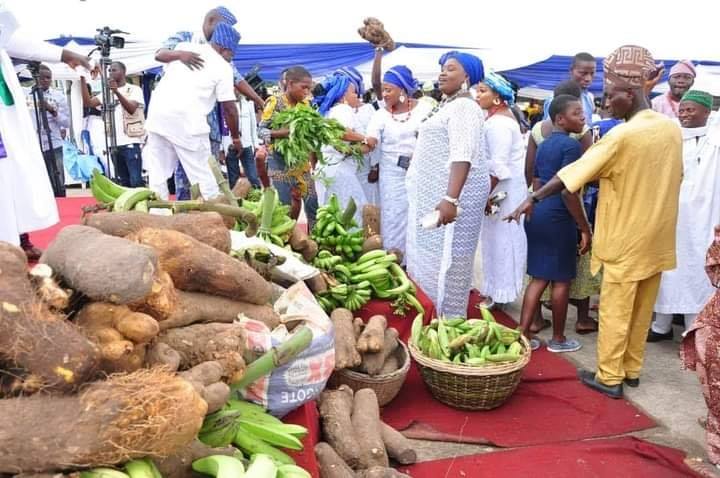 Odun Omo Olowu is the major annual festival observed by the Owu people. As its name suggests, it is an annual rallying event for all Owu citizens who are regarded as sons and daughters of the Olowu.

It is observed after the harvesting season which translates to the end of September or early in October of each year. By keen observation it is reckoned that the year’s yam harvest would still be available in the barns in the farms, yam being a major item in the menu for the festival.

It begins with a consultation with the Olowu for a suitable date for the commencement of the year’s celebration. This is called ‘Igbojo” i.e. the fixing of the date to flag off the commencement. Once the date is fixed the ‘Obamogbo’ and Alojee’ traditionalists take over preparation for the festival. The Olowu being the chief celebrant is responsible for providing the materials for the rituals. The monarch must provide a compliment of gifts comprising a load of yams, a hind leg of an ‘agborin’ (an antelope), etc.

The Obamogbo receives these items. By contrast the Alojee receives one bottle of palm-oil. The festival itself kick-starts with an eve of the festival celebration called ‘Ojo Ale Odun’ or ‘Odun-ku-ola’. To begin with, the main events of the festival span 3 days – the eve night, plus the next 2days.