Odun Omo Olowu is the major annual festival observed by the Owu people. As its name suggests, it is an annual rallying event for all Owu citizens who are regarded as sons and daughters of the Olowu.

The Owu Annual Festival is observed after the harvesting season which translates to the end of September or early in October of each year. By keen observation it is reckoned that the year’s yam harvest would still be available in the barns in the farms, yam being a major item in the menu for the festival.

It begins with a consultation with the Olowu for a suitable date for the commencement of the year’s celebration. This is called ‘Igbojo” i.e. the fixing of the date to flag off the commencement. Once the date is fixed the ‘Obamogbo’ and Alojee’ traditionalists take over preparation for the festival. The Olowu being the chief celebrant is responsible for providing the materials for the rituals. The monarch must provide a compliment of gifts comprising a load of yams, a hind leg of an ‘agborin’ (an antelope), etc.

The Obamogbo receives these items. By contrast the Alojee receives one bottle of palm-oil. The festival itself kick-starts with an eve of the festival celebration called ‘Ojo Ale Odun’ or ‘Odun-ku-ola’. To begin with, the main events of the festival span 3 days – the eve night, plus the next 2days.

The Obamogbo haven received the traditional gifts, proceeds to perform the ceremony of appeasing ‘Obalufon’ (an ancestral representation) over the night, culminating in all the ‘Imogbos’ and people coming to the palace gleefully to dance in the presence of the Olowu and its regarded as the main day when the Olowu flagged off the celebration.

The next day is ‘Ojo Aiirin’ otherwise known as ‘Eburedun Day’, which is a curfew day on which all sons and daughters of Owu are required to observe a holiday when they should neither go to the farm to work nor go to the river to draw water. It is observed in honour of all those Owu citizens who had died during the past one year. This day is also called ‘Ojo Aweje Awemu’, i.e. a feasting day. It is in essence a Memorial Day. These complete the major events for the ordinary citizenry which as we have observed last 3 days. After these, people are free to return to the pursuit of their daily bread.

But the festival continues for the chief celebrant. For the Olowu, the next is ‘Ojo Igbasan’ (a day to receive the presentation of a new whip). The Oba is presented with an additional ceremonial whip which he places alongside the existing batch which serves for counting the number of years he has ascended to the throne. It is the total batch so kept that is counted at the end of this reign to let the people know for how many years he has reigned. This traditional system was designed of old as a fool-proof calendar to forestall falsifying the number of years a monarch has reigned over the great Owu people.

The final day is called ‘Ojo Igunwa’ (Royalty Day). This is the day on which the Olowu sits in royal splendor on his throne and receives the homage of the Owu chiefs and people. This grand finale is rounded up with the beating of ‘Gbedu’ drums (state drum set) to which the Olowu dances to the admiration of Owu people and to signal that the year’s Odun Omo Olowu has come to an end.

To the Owu, the Odun Omo Olowu is the unique festival to look forward to every year.

The original purpose of celebrating Omo Olowu festival is to give thanks to Olodumare (Almighty God) for supplying all needs. The annual Owu Day festival tradition started in 1999 and has attracted participation by several Owu indigenes and people from all over the world.

On October 9, 2010, the Olowu of Owu Oba Dosunmu publicly declared the first weekend of the month of October as Owu Day for public celebration of the goodness of the Almighty God. This declaration was made to usher in the new Odun Omo Olowu which is to henceforth replace the previous Owu Day Festival which incidentally had its 10th and final outing last year on the 10th day of the 10th month!

The debuting Odun Omo Olowu also incorporated the ancient traditional New Yam Festival which was dramatically staged by the Olowu himself, much to the delight, admiration and applause of the attendant crowd and dignitaries!

Odun Owu Festival:
A snippet of the celebration

Isan is an ‘’atori” – a slim and elongated rod spirally pealed in a rung from is thick end up to its vanishing top. It is a special tree which will sprout again and again even when it is forcefully uprooted. Its survival rate and longevity is unequal among the trees of the forest although it does not grow into a timber. It is so flexible that it does not wear when used incessantly.

Its use vary from being ‘’a rod on a fools back’’, or ‘’for correcting an erring child who must be taught wisdom”.

Isan is not an object of worship; but a natural phenomenon with which a family or a trainee considers himself closely related to. Example: an atori seating Innocently in a father’s bedroom strike terror (of being beaten) in the heart of a truant.

An Isan is placed in the shrines of egungun (masquerade) or Kori (fertility goddess) to instill the consequences of floating the rules of the corporate worshippers..

It is for completely different purpose that the Owu people present an Isan to an Olowu although it also stands as an emblem of the community’s acceptance of him as having authority over them.

In Owu, the Isan is used to record the number of yam festivals or Odun Omo Olowu an Olowu has celebrated. If he ascends the throne today and celebrates a festival tomorrow, he is deemed to have celebrated one year on the throne whereas if a festival is celebrated today and the Olowu as ascends the throne tomorrow, he has not spent that year hence counting of his first year on the throne starts from his first celebration of Odun OMO Olowu and it is during this festival that the Olowu receives Isan. He receives one per year (festival). He keeps it away in a good corner of his Palace and this is counted to know how many years the Olowu had spent on the throne. 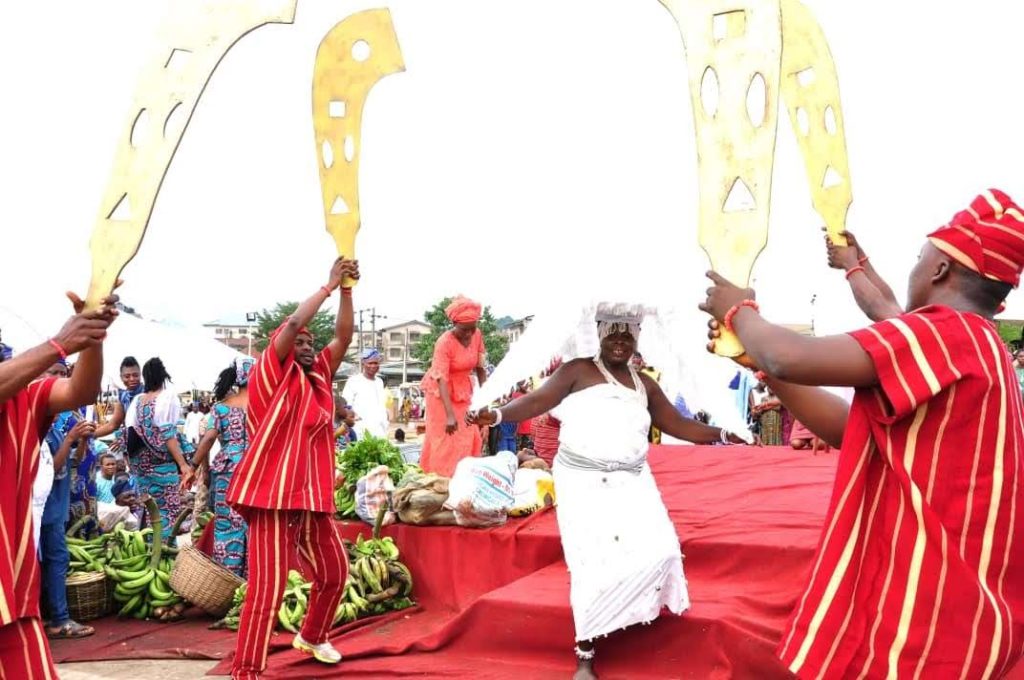 When Isan is presented to Olowu during Odun OMO Olowu it is:-

As stated in the accompanying song, it is to confirm

This custom had become almost extinct. The last time Isan was publicly was to Kabiyesi Oba Salami Ajibola in 1970, his last two years; he was too frail to stand the rigors of collecting it and dancing to accompany it.

It is for the above reason that we have to explain the ritual. It has no spiritual or sacred worship of any idol. It is also not a secrete in any form. It is symbolic of durability, peace and wisdom today we take this not as a religious worship, but as an observance of a set form in public worship of the Most High God who has given our Monarch yet another year of peaceful reign over us.